Is your ice maker producing white, cloudy ice when you're expecting crystal-clear ice?

Ice from ice makers is usually white because air bubbles get trapped inside the ice during the freezing process. ice makers freeze the ice from the outside in or freeze it too quickly causing air to get trapped. To get clear ice you need a clear ice maker that freezes ice omni-directionally.

If you want to know why your ice maker makes white ice, you've come to the right place. In this article will discuss six of the most common reasons your ice is coming out white and some ways to fix the problem and end up with clearer, better tasting ice.

1. Air Gets Trapped In The Ice

In most ice makers in your freezer an ice tray is filled up and then the ice is frozen like ice in a normal ice tray would be – from the outside inwards.

This freezing process pushes dissolved air bubbles and gases towards the center of the ice where they get stuck. This creates a white, opaque center.

Since the outside edges freeze first, the air bubbles have nowhere to escape, trapping the bubbles inside the water.

You will notice that the center of an ice cube is made up of a cluster of closely spaced air bubbles if you examine it.

As they are forced into the middle these bubbles (which can be visually undetectable in regular water) start to gather together and ultimately freeze to appear as a solid white clump due to the refraction of light. It's this refraction of light that causes ice to be white in the middle.

This form of freezing from the outside in is this #1 cause of white ice. In order to make clear ice you need to freeze ice omni-directionally (in one direction).

Ice makers do this by constantly pouring water over a cold metal plate. This makes the ice freeze from the bottom up, pushing out air bubbles and impurities as it freezes. This form of making ice is why restaurant ice and bagged ice can be so clear sometimes.

You can see the difference in 2 types of ice makers below. One makes clear ice and one makes white ice:

While you can make clear ice from tap water it is more difficult to do. Tap water often contains mineral impurities which, once frozen, make your ice opaque and white.

Ice cubes can become cloudy due to impurities from hard water containing too many dissolved minerals. The outer layer of ice traps air molecules when the water freezes from the outside.

When water containing magnesium, calcium, and sediment freezes, gases are released, forming air bubbles and occasionally causing ice to contract. You can tell if your ice is hard when you get white residue on your silicone ice cube trays, or on your ice cube machine.

But even if you don't have “hard water” there can still be a lot of mineral impurities which can affect the color of your ice. If you have this issue you might want to try filtering your water, softening your water or using distilled water to get clearer ice.

This could be the issue, especially if your ice maker is generating white ice in a smaller size too.

In addition to imparting a bitter or metallic flavor, the minerals in white ice can diminish the quality of beverages. Because clear ice is often made with filtered or distilled water this is one of the reasons clear ice tastes better than white ice.

3. Cracking In The Ice

As the temperature drops, ice contracts, and as the temperature rises, it expands. When ice cube makers finish freezing the ice they often run a heat cycle to slightly melt the outside of the ice and get it to fall into the ice bin.

In response to the rising temperature the ice expands and this can cause cracking in the ice.

If you look closely, the crack causes a white “wall’ on the inside of the cube or all throughout the ice cube.

So even if you have a clear ice maker this cracking can cause your clear ice to become a bit more white.

However, if your ice is white and cloudy then it's probably not cracking but more likely trapped air and minerals in the ice.

Smaller ice cubes tend to be cloudier than large ones due to the cube size to bubble ratio.

Because there are more air bubbles in smaller ice cubes, the ice will appear much whiter when the cubes are smaller.

There is only enough space for the air bubble cluster which leaves no space for a clearer outer section like in larger ice cubes.

Larger cubes tend to create more concentrated pockets of air in the center of the cube. Making the outside appear at least slightly clear and the inside appearing white. Large clear ice cubes last longer and melt slower than smaller cubes too, which can be another benefit.

Both built-in ice makers within your freezer and tabletop ice makers can experience this issue.

If the ice freezes too fast then there is a good chance that it will be white in appearance. This is because the air bubbles and impurities don't have enough time to escape from the ice as it freezes.

You can see this in the video below where a tabletop maker makes ice extremely quickly and it ends up looking very white even though it's frozen omni-directionally (from the inside out).

You can slow this process down by lowering your freezer’s temperature. This works for ice makers that are in your freezer and freeze ice in the regular way.

However, tabletop ice makers do not offer this choice.

Unlike most other ice cube-making equipment, Nugget ice makers use a different approach to making ice cubes that are unlike any other.

Water gets pumped into a metal cylinder that freezes on the machine's ice-cold walls. A spinning auger removes (scrapes) the ice from the cylinder's walls and pushes it upward compressing it into ice cubes.

Because nugget ice is made from compressed flaked ice (think compacted snow) it's full of air bubble and cracks that reflect and refract the ice making them appear very white.

This is a small sacrifice to make to get amazing soft chewable ice from these nugget ice machines and a lot of people think that nugget ice makers are worth the money even though they make white ice. 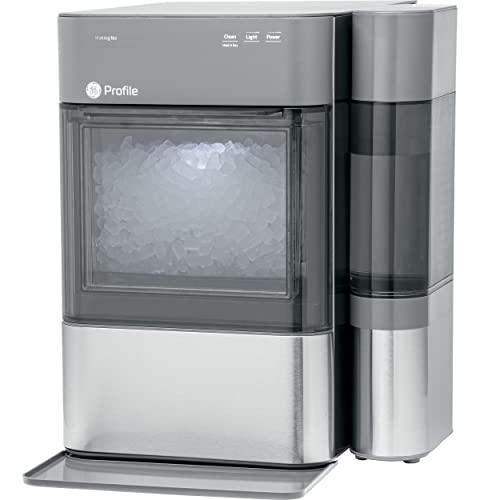 Should Ice From An Ice Maker Be Clear Or White?

Most people believe that filthy water is to blame for opaque ice. While they aren't always wrong, they forget the freezing methods involved and the fact that the main cause of white ice is air bubbles – not dirty water.

Freezing causes water to lose some molecules and dissolved oxygen, which contributes to cloudiness.

Water freezes from the outside when exposed to the cold air in a home freezer.

As a result, the oxygen and other impurities are forced toward the core of the ice cube, where they are trapped.

Because industrial ice machines freeze water from the bottom up, they produce clearer ice than home ice makers. Impurities and oxygen are expelled from the ice due to this process.

In most ice machines, the impurities are forced out of the ice via a waterfall process that creates the ice from the mold's edges. Even if the differences between foggy and clear ice may not be considerable, anyone who wants to provide only the best should consider an ice machine that produces clear ice.

How To Get Your Ice Maker To Produce Clear Ice?

Below are a few ways to achieve clear(er) ice. Please be aware that these preventative methods do not guarantee that your ice will be 100% clear.

Whenever the valve is jammed, minerals will get into the water, lowering ice quality and making it cloudy. Prevent this by cleaning the evaporator and dump valve every month.

Invest in a water softening system.

In essence, water softening systems will take out the dissolved salts and minerals in your water.

You must install water softening systems at the home's main water line to treat all incoming water.

You can ask a professional to install your water softener, even though many devices include instructions for self-installation.

Use Demineralized Water to Make Your Ice

Purchase and use demineralized water to make your ice. This water has had the majority of its minerals and salts removed.

It is available in select supermarket stores. On the container, it will be labeled as “demineralized.”

Use Hot/Boiling Water Instead Of Cold

While boiling water in itself does not magically create crystal clear ice it does help to make ice clearer.

Boiling the water causes some dissolved gases to be expelled from the ice. This leaves you with ice that is purer and less likely to cause air bubbles.

Boiling water first then freezing ice omni-directionally is one of the best ways to get clear ice.

The 6 main reasons why your ice maker is making white ice instead of clear ice include:

Click here to learn about the biggest mistakes people make when trying to make clear ice.