Ice cube trays are predominantly made out of plastic, silicone or (to a lesser extent) stainless steel. But with some recent research saying plastic has the potential to leach harmful chemicals into your food/drink, it got me wondering what ice cube trays are the safest and best to use?

There are really only three ice-cube tray types – plastic, silicone, and stainless steel – and all three have their pros and cons.

Silicone and stainless steel ice cube trays are the safest to use as they won’t leach any harmful chemicals into your ice. However, plastic trays are cheaper and generally easier to use.

No ice cube tray material is “the best” compared to other types. Each has its own pros and cons, and you need to choose the option that is best for you.

Below we’ll have a look at the pros and cons of each ice cube tray option so you can choose the one that is best for you and make an informed decision.

What Are The Safest Ice Cube Trays?

Just from a safety perspective, stainless steel ice cube trays are the best. However, you could definitely make the argument that silicone ice cube trays are equally as safe as they are also inert and won't leach chemicals into your ice cubes.

Unlike plastic trays, stainless steel trays are BPA (bisphenol A) free which is a controversial organic compound that raises many health concerns. Some studies have shown plastic leaching this chemical into drinks and the same could be true for ice cube trays.

Stainless steel ice cube trays are made from 18/8 food-grade stainless steel which is even dishwasher-safe, 100% recyclable and reusable.

It is the same grade steel which is used in making high-quality kitchen utensils and it used in everything from fry pans to insulated water bottles.

They Are Environment & User Friendly

Stainless steel ice cube trays are recyclable and considered by main to be the best eco-friendly ice cube tray option.

For people wanting to avoid waste these are a great choice as they can last decades and when they do finally end their lifespan it is possible to recycle the metal into more stainless steel objects – creating little waste.

They are fairly user friendly with a handle that lifts to break the ice which you can then get out and they are easy to clean and dishwasher-safe.

They do contain iron, nickel and chromium but I did a lot of research into whether or not stainless steel is safe to use in water bottles and there seems to be little to no issue with these compounds.

For me personally I feel they are the safest option for making ice cubes.

Something that I noticed from my own stainless steel ice cube maker is that the ice it made seemed to be clearer than ice made in a plastic or silicone ice cube tray.

This may be because of the conductivity of the metal causing the ice to freeze faster squeezing the impurities in, I'm not actually sure. But they do seem to make more clear ice which also tends to be harder and melt slower.

It's not completely clear but the difference was noticeable.

There are some brands that are cheaper than others but none are as cheap as plastic or silicone trays. Check out my list of the best stainless steel ice cube trays for a full list.

But it seems pretty much all brands are made from the same manufacturer (or at least using the same design). For that reason I recommend the Vintage Kitchen 2-Pack Metal Ice Cube Trays.

These work out to be about half the price of other brands. 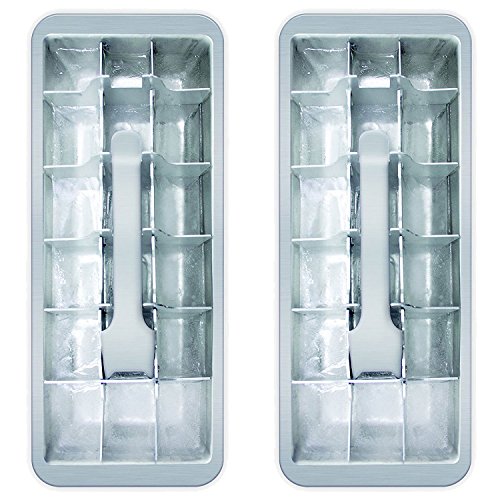 Stainless steel trays usually take up more space than plastic and silicone trays. They are not stackable and you have to buy a separate stand to put multiple trays on top of each other.

If you want to be able to stack 2 trays on top of each other then the Ecozoi Dual Pack with stand is a really cool option and the only one of it's kind I've seen. 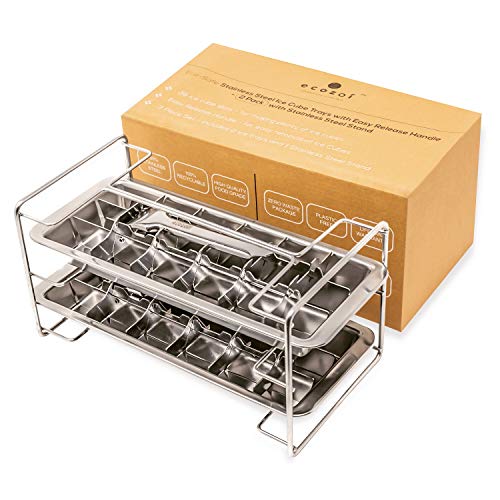 You can find silicone molds in almost all colors and designs. You can easily match these trays with your fridge or kitchen theme.

Their flexibility also allows them to be molded in any shape so there are endless ice cube shapes you can create with silicone molds.

They Are Very Flexible

Silicone ice cube trays are very flexible and durable. They are unlikely to crack or break like plastic trays and can last a long time.

Their flexibility also makes them easier to clean and store.

Unlike plastic trays, silicone does not contain toxic chemicals like BPA. It makes them healthy to use for making ice cubes and even freezing juices and baby foods.

Silicone ice cube trays are inert and won’t leach any harmful chemicals into your ice cubes. Even at high temperatures silicone trays and safe to use with food products.

Silicone ice trays absorb the freezer odor and smell. Especially strong and permeable smells from the surrounding foods get inside the ice cubes and make them taste bad.

Using hard water in your silicon trays to make ice cubes can develop a white residue at their bottom.

It is because hard water contains certain minerals that separate from the water after freezing. They can also give your ice cubes a strange taste.

Ice Is Hard To Get Out Of Silicone Ice Cube Trays

While silicone ice trays are very flexible it is usually a struggle to get the ice out of them. You have to individually take out each cube unlike the plastic trays where a simple twist is enough to release the ice cubes.

Ice trays made of 100% silicone are completely safe to use. However, some manufacturers use impure silicone mixed with cheap materials that can take away this safety.

If you use hot water in such trays, they might leach chemicals into the ice like plastic trays.

Make sure to buy your trays from a reputable brand. Click here to see some of the best silicone ice cube trays.

Affordability is the biggest advantage of plastic ice trays. Out of all the options available, they are hands down the cheapest. You can get yourself a large set of plastic ice cube trays for the price of one metal tray.

Many Plastic Trays Come With a Lid

The lid will also prevent any impurities and other nearby food odors from getting inside your ice cubes.

Plastic Ice Cube Trays Are Easiest To Use

Plastic trays are also known for their ease of use. You just need to give a little twist to these trays and the ice cubes will easily pop out on their own.

One of the biggest disadvantages of plastic trays is their potential to leach harmful chemicals into your ice. When water freezes in plastic trays, these toxic chemicals can potentially seep into the water which may cause some health risks.

You must ensure that the plastic ice cube trays you buy are BPA-free so that they are safer to use. But even then it seems there is still the potential for some chemical leaching, especially if you a filling your ice cube trays with hot water.

They Are Not Eco-Friendly

Plastic is a non-biodegradable material. It is a synthetic material made up of long polymer chains which bacteria cannot break down naturally.

Most plastic ice cube trays are non-recyclable and as we have seen lately much of the plastic we try to recycle ends up in landfill anyway. This means once they break or wear down you have to throw them out and they end up in landfills.

Plastic Trays Can Get Damaged Easily

After some time of usage, plastic ice cube trays can get cracked. This is because as water freezes it expands and exerts pressure on the tray damaging it.

Plastic, silicone and stainless steel are the three materials used to make ice cube trays. No material can be declared the best because each has its pros and cons.