Ice cubes are sold and created in a wide variety of shapes. They’re offered in such a large mixture of configurations because each shape offers different benefits.

Learning what the different shapes of ice cubes are and how they’re useful will help you choose the right shape for your needs.

Ice cubes are offered in a variety of small and large shapes, including, most popularly, regular, full cube, dice, crushed, and nugget. The smaller shapes cool faster and blend more easily, while the large shapes melt slowly and offer long-lasting cooling.

A regular cube is the traditional rectangular ice shape that you’ve likely made in a tray and used a million times. These cubes aren’t uniform in size, but they’re solid, slow melting, and work for use in coolers, in bags, in drinks, and in most other situations.

Regular cubes aren’t particularly appealing to look at, and they can be difficult to blend, but they’re easy to obtain and good enough for most uses.

Use them to cool drinks at home or use them in your cooler to keep items cold. While regular ice cubes do the job for most drinks you're trying to make high end cocktails or serving high-end spirits these aren't the most visually appealing or practical ice cubes and other solutions are often better.

Learn how to make regular cubes and other large sizes last longer in coolers with this helpful guide on making ice last longer.

Full cubes are uniform-shaped cubes of ice that offer a cleaner and more upscale appearance compared to regular cubes. They are slightly smaller in size but melt slowly and can be bagged, used in drinks, and relied on for most cooling needs.

Full cubes usually come from ice maker machines and they tend to be completely clear. Learn why restaurants have clear ice and why ice at home tends to be white.

Full cubes take longer to make and are less common that half cubes, which are commonly used in fast food chains like McDonalds and Subway.

The half cube is a full cube split in half to create a smaller rectangular prism shape. This versatile cube is good for most applications and can be used in place of regular or full cubes when you want drinks cooler faster.

Half cubes are known for use in ice dispensers and ice bags and for being readily available in local convenience stores.

They are also extremely common in fast food restaurant chains where they are used in their drinks and sodas. These ice cubes are faster to make and are usually clear.

Often they stick together on one side giving you ice cubes that kind of look like a block of chocolate.

Crescent ice has a crescent moon shape that helps it cool drinks rapidly while filling most containers uniformly.

This style of ice is a favorite of commercial kitchens and works well for cooling drinks with large amounts of ice while still allowing the liquid to flow freely while the user drinks it.

Crescent ice can be manufactured rapidly and requires less energy to create than larger ice shapes.

Bullet ice is named because it is shaped roughly like a bullet.

These ice cubes are commonly found in at-home ice machines that make ice by rapidly freezing water around a cold tube that is dipped into water.

The ice usually appears white from its rapid cooling and is considered a fairly cheap form of ice. It is rarely used in commercial ice makers but can sometimes appear in bagged ice.

Tubular ice is common in restaurants, bars and in the bagged ice that you find a convenient stores or petrol stations and supermarkets.

It is made by pumping water through a freezing vertical metal tube where it is frozen and then cut at the bottom into shorter tubes.

The ice is usually clear and has a hole through the middle making it look like a pipe/tube.

Crushed ice is created by blending, smashing or cutting full ice cubes into tiny pieces. It’s commonly dispensed from refrigerators and is also used regularly in frapes, cocktails and other iced beverages.

Crushed ice works best for drinks that are meant to be frosty and watered down. Use it in blended drink creations, slushies, and cocktails that benefit from dilution. Crushed ice melts rapidly and will quickly become part of the drink.

They look impressive, but more importantly, they melt slower than most cubes. Ice spheres are commonly used for upscale drinks and sphere ice cubes are a favorite for whiskey and scotch.

Add one of these oversized spheres to a whiskey glass, and you can refill the glass multiple times with minimal melting. Spheres are preferred when you want to avoid watering down your drinks.

Nugget ice is ideal for soft drinks and for blended ice creations. It has recently become popularized by the drive through store Sonic where customers love small ice cubes used in their drinks. Learn more about Sonic Ice.

Nugget ice can be made in ice cube trays but more commonly it is made from specialty machines like the Opal Nugget Ice Maker. Nugget ice machines compress flaked ice and turn it into nuggets. These are the best ice cubes for eating as they are very soft and unlikely to damage your teeth.

Previously only available from commercial machines recently there are at-home machines that make nugget ice. See the 10 best nugget ice machines for home.

Nugget ice can leave drinks watery rapidly. It’s often used by medical facilities on its own for patients to chew comfortably. Learn how you can make nugget ice cubes at home with this simple guide.

Gourmet ice has a unique octagonal/circular shape with a top-hat-like appearance. This is the premium ice for high-cost drinks and is known for melting slowly and looking stunning. It tends to be less common than other forms of ice.

When you want drinks to stand out for their appearance and to remain cold without getting watered down, gourmet ice is one of the leading options.

Gourmet ice takes longer to make than most other varieties, except for the sphere or larger clear ice cubes, and creating this ice requires more energy than smaller shapes.

Flake ice has a flat, watery consistency and is nearly the shape of a snowflake. This is ice that has been scraped to form a snow-like consistency.

This ice has more water content than most and melts fastest of all.

Flake-shaped ice is best for cooling fish, produce, and other items over a wide area. Flake ice is used to make snow cones and slushies and is ideal when you need to cool drinks as fast as possible.

Flake ice can make drinks watery and is only good for use in a single drink because it melts rapidly.

Large clear ice cubes different from “cube ice” in the fact they are much larger. These ice cubes are usually 2 inches in diameter and are made to be completely clear.

They are mainly used in whiskey, scotch and other drinks where you want as little dilution as possible.

These are increasing in popularity due to their impressive look and how slow they melt.

Commercially they are cut from clear blocks of ice and restaurants can buy these clear ice cubes or you can also make them at home with a special clear ice maker. See the list of the best clear ice makers.

Block ice is exactly what it sounds like, large blocks of ice.

You can make your own block ice at home using old cartons, milk bottles or a variety of other methods.

Occasionally bars and restaurants will make clear block ice and then cut it into smaller cubes for use in their drinks. Commercially clear ice is made in large blocks and but is usually pre-cut and sold in smaller shapes. 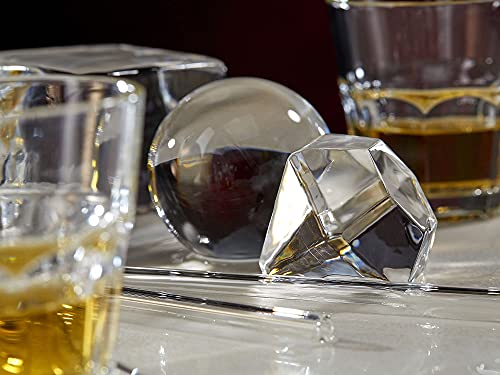 With the introduction of silicone ice cube molds as well as japanese ice presses (which form clear ice cubes into specific shapes) there are a wide variety of shapes now available for ice cubes.

Some of the most common shapes include: