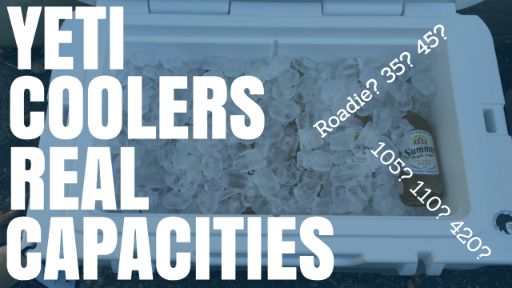 Yeti coolers have model numbers that differ from their size. A Yeti 35 is actually only 29-Quart, a Yeti 45 is only 37-Quart…and so on.

Here is a full list of the Yeti cooler actual capacities in Quarts, Gallons and Litres.

This list will help you know exactly what you re buying, and will help you make a better comparison between Yeti and other cheaper brands of roto-moulded coolers.

Why The Confusion Around Yeti Quart Capacities?

Yeti uses deceptive marketing by using model numbers that seem to describe the quart capacity of their coolers but actually don't.

Here on their website Yeti actively talk about exterior and interior dimensions as well as how many cans of beer a cooler can hold, but for some reason they omit the actual quart capacity of their coolers.

Many customers have gone out and bought a Yeti assuming it was a particular capacity only to find that it was much smaller than expected.

Where Yeti pull their magical model number names from I don't know. But here is a list of the capacities of almost all the Yeti coolers so you know exactly what you're getting.

How Can I Confirm These Yeti Cooler Capacities

Yeti don't share quart capacity sizes anywhere on their website, to the frustration of myself and many other customers. 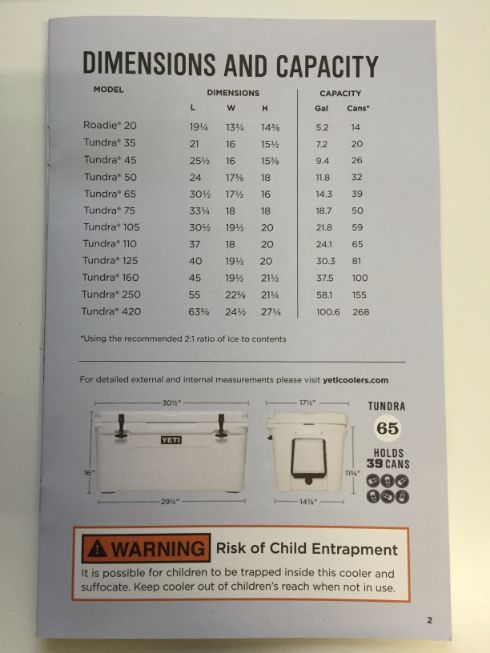 However, I recently bought a Yeti 45 and when it arrived it came with a Yeti owners manual. Inside this owner's manual was a list of almost all of the Yeti models with their exact capacities.

I have attached the image (click it to enlarge) so you can see for yourself. They also have an online brochure which contains the same dimensions – click here to view that [6.6mb].

Yeti clearly know the capacity of their coolers, however choose not to share this with potential customers. I assume this is to make it harder for competing companies, as well as savvy customers, to make direct comparisons between Yeti's sizes and the sizes of coolers similar to Yeti.

Do All Coolers Hide Their Real Capacity?

Check out my list of coolers like Yeti but cheaper to see some of the best coolers you can buy, for a fraction of the cost of a Yeti.

Or check out my Ultimate Cooler Comparison Guide to see the capacity and dimensions of almost every cooler on the market.

I'm Ryan McLean, the guy behind The Cooler Box. I first got obsessed with coolers over 4 years ago when I was renovating my campervan getting ready to travel the country with my family and I wanted to know how to keep everything cold on the road. Most weekends you'll find me at the beach or off on some random adventure. But when I'm not I'm here writing about coolers, water bottles and other cool gear to make your adventures even better. I love researching the latest products and answering people's questions about them. Over the last few years The Cooler Box has grown to become one of the most comprehensive websites on insulated products and other cool gear. You can also check out my YouTube Channel where I do ice retention tests and product reviews or you can follow me on Instagram and see what I'm up to.

K2 Cooler Review – Should You Buy A K2 Cooler? Is The Coleman Xtreme Water Tight and Air Tight?

What is Silica Gel?

Hey I’m Ryan. I love getting out into nature and it’s where I feel most alive. My favorite days are those spent in the bush or at the beach with people I love. “The Waterfall Hunters” are what me and my family call ourselves as we love hunting down new waterfalls to explore, swimming holes to dive in or beaches to surf at.

I also love the wide range of gear that allows us to travel further and eat and drink better while we are out exploring. From coolers to coffee mugs I love it all and love sharing my finding with you. Learn more about me here.