Keeping your driveway and sidewalks free of ice in the wintertime is crucial for safety. Icy sidewalks can be extremely slippery and dangerous and lead to falls.

While you can remove ice from a sidewalk after it's formed it can be an even better idea to prevent the ice from forming on your sidewalk in the first place. This is especially important in high trafficked areas. But how exactly do you prevent ice on your sidewalk?

The best way to prevent ice forming on your sidewalk is to apply a layer of ice melt before the snow storm or in the evening before temperatures drop. This will mixed with the snow as it falls, causing it to melt and not form into ice. However, if temperatures drop below the working temperatures of the ice melt then ice will still form but will melt more easily once temperatures rise again.

You can also prevent ice from forming on your sidewalk by laying down tarps over your sidewalk before the snow storm, stopping the snow from reaching the pavement. This only works with light snowfall as otherwise the tarp can be difficult to remove and shoveling snow will still be required.

In this guide, we will explore different ways of preventing ice on your sidewalks, driveway, and parking lot.

1. Apply Ice Melt Before Snow Fall or Before Evening

Applying ice melt before snow fall can be one of the best ways to prevent ice from forming on your sidewalk in the first place.

You'll often see local councils doing this to roads and pathways before or during a snow storm.

This works because the snow mixes with the ice melt and the salt lowers the freezing point of the water, stopping it from freezing into ice.

This is ideal in high trafficked areas where you need to maintain traction at all times. However, it can be wasteful especially if you are expecting a lot of snow.

Too much snow will dilute the ice melt to the point where it now longer works properly and the ice melt can potentially get washed or blown away in big storms.

Ice melt is better used after snow and when temperatures are warmer. For best results shovel or remove excess snow on top and apply the ice melt directly the the thin layer of ice on your sidewalk. However, it can still be effective used before snow in order to stop ice from forming.

Depending on the outside temperature and conditions will depend on which type of salt is going to be best for your sidewalk.

Understanding the different types of ice melts available can make a huge difference in your effectiveness in reducing the quantity of ice and snow around your home or commercial structure.

Rock salt is one of the most popular deicers. However, there are other solutions and formulae that are more effective in certain situations.

Here are the 7 different types of ice melts as well as their pros and cons.

Rock salt, also referred to as sodium chloride, is one of the most popular ice melts and also the least expensive.

If used properly, rock salt is safe for the environment, but accumulation in the soil can kill plants.

Rock salt is somewhat corrosive to metals and it also isn't the ideal option for concrete. All ice melts deteriorate concretes to some degree, but rock salt can be particularly bad, especially on fresh concrete.

One of the downsides of applying regular rock salt is that it doesn't last long once applied as it can be easily blown away by winds. A liquid brine (salty water) is a great alternative to stop ice forming on sidewalks as it's less likely to blow away.

Liquid brine is a solution of roughly 1/4 parts sodium (salt) and 3/4 parts water, making it better for the environment. Furthermore, liquid ice melt is cheaper compared to rock salt and works best when applied before a snowfall.

The best way to easily and quickly prevent ice and snow from parking lots and sidewalks is to apply liquid brine prior to a storm.

Remember, the more diluted the solution, the higher the freezing point.

Calcium chloride ice melt performs best in colder temperatures compared to other ice-melting compounds, although it tends to be more expensive than other compounds.

On contact with snow or ice, it melts the ice and bonds with moisture to form brine, which lowers water's freezing point, causing the snow or ice to melt.

It is an excellent choice for buildings with concrete. Calcium chloride's lowest melting point is -25°F (-32ºC) making it the ideal choice in locations that experience extremely low temperatures.

Calcium chloride can still damage concrete like rock salt does, but not by as much.

Magnesium chloride is effective in cooler temperatures. However, it is more expensive and slow-acting than some of the other products.

One of its main advantages is that it is more environmentally friendly that some other salts, particularly to plant life, but it can have extremely damaging effects on concrete. Magnesium chloride's lowest melting temperature is 0°F (-18ºC).

This is one best environmentally friendly alternative available because it is biodegradable and does not contain any chlorides. However, it is one of the most costly options and again is quite damaging to concrete.

It does not corrode metals and you don't need to reapply as frequently because it has a longer lasting effect. The FAA has authorized the use of sodium acetate (NAAC) on runways at commercial airports. Its lowest melting temperature is 0°F (-18ºC).

Due to its high price and inferior effectiveness compared to other compounds, potassium chloride is no longer widely used.

It is not environmentally friendly and less efficient in colder regions. Its lowest melting temperature is 25°F (-4ºC)

Urea has nitrogen, which can actually help plants to grow, but if used in excess or incorrectly, it can burn vegetation.

Just like potassium chloride, urea's application as an ice melt has dwindled. Its lowest melting temperature is 25°F (-4ºC), hence not effective in colder climates. But in more milder climates where temperatures get just below freeze it could be a good alternative to rock salt for melting ice and keeping your plants safe.

Ice melt is available as a mixture of the aforementioned substances. In most cases, sodium chloride is combined with one of the more costly chlorides. Corrosiveness, lowest effective melting temperature, and environmental impact all vary depending on the chemical composition.

Blends, such as magnesium and sodium chloride, can be used to melt snow and ice faster compared to rock salt.

2. Cover sidewalks with tarps before the storm

You can use physical barriers if you don't want to use snow melt chemicals to prevent ice and snow from piling up on your driveway or sidewalk.

Simply spread a large, sturdy tarp on your sidewalk before it starts to snow and weigh down the sides with bricks or wood so the tarp doesn't blow away.

Allow the snow to fall and then remove the tarp and ice or snow all at once after the storm.

Keep in mind that if snow has already fallen, the tarp approach is ineffective. Moreover, heavy snowfall might weigh down the tarp and make it difficult to move.

The best situation to use this technique is just before a light snowfall.

This waterproof outdoor tarp is great for covering items or placement under a camping tent. 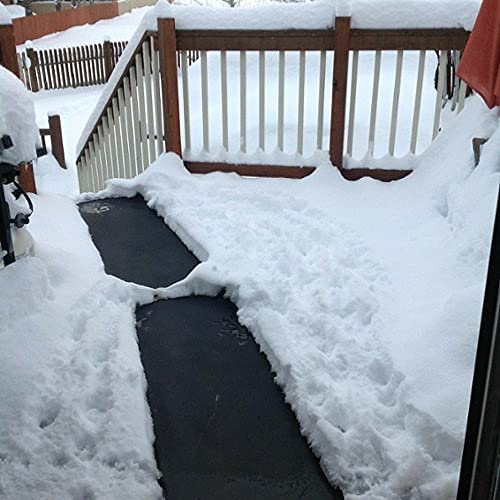 An alternative way to remove snow and ice is with a heated pad. Electric heat mats are a highly efficient technique for preventing ice buildup on your sidewalks and pathways.

The downside to these mats is that they are quite expensive to purchase and will set you back hundreds of dollars for a single mat. To do a larger sidewalk or pathway this isn't going to be a viable option, but for smaller ones they can work great.

Using tough rubber mats with in-built heating technology, the snow is continuously heated to a temperature that melts the snow that is in contact.

In addition to removing any existing ice and snow, heated floor mats also stop any fresh snow from falling by melting it instantly at a pace of 2 inches per hour.

You can rest assured that the mats will remain functional even in severe winter storms because 1″ per hour is regarded as “heavy snowfall.”

These are designed mainly for home use and I don't think the durability would be there to withstand commercial traffic levels.

A more expensive solutions and one that requires more upfront planning a heated sidewalk (just like a heated driveway) can be a great way of stopping ice from ever forming on the sidewalk.

Ideally you get heating installed before the sidewalk or pathway is created. Melting cables and mats can be installed beneath pavers, concrete or asphalt during any sidewalk installation.

There are some solutions that can be placed over existing sidewalks, but these are mainly used to add heated tracks to driveways.

Once connected to an automatic control, the walkway heating system will automatically turn on to keep your space free of snow and ice, saving you time while keeping the space accessible and safe.

The product or method you choose to use to prevent ice and snow on your sidewalks will depend on a variety of factors such as climate, amount of snow expected, and budget, among others.

For instance, liquid ice melt is a relatively newer alternative to solid ice melt, which has been the conventional and most often used technique for clearing snow and preventing ice.

However, one of its main benefits is that once applied, liquid deicer dries to the surface, unlike solid pellets. As a result, it is not blown away by the wind, foot traffic, or passing cars.