It’s your turn to host game night but your neoprene mat has been folded up for a week and now has bold creases cutting across it at right angles. Or perhaps you have an occasion to attend and discover an unsightly wrinkle running down that new neoprene dress you have been dying to wear.

You will likely be wondering: Is it safe to iron neoprene? Otherwise how can you get the creases out without ironing it?

Yes, you can safely iron neoprene but precautions should be taken. The iron must be used at its lowest temperature setting and there needs to be a buffer material between the iron and the neoprene such as a towel, t-shirt or parchment paper.

Neoprene (aka polychloroprene) is a synthetic rubber commonly used to make wetsuits – but it's also used to make gaming mats and well as dresses, skirts and other forms of clothing. You are wise to be questioning the safety of approaching it with a hot iron as neoprene can melt if you iron it incorrectly.

In this article we will discuss in detail the potential pitfalls when attempting to iron your neoprene gear, as well as show you the correct way to iron neoprene safely – without damaging it, or your iron.

You might not have the space to store your game mat open on a flat surface. If you've folded it for storage (like many of us do) you will likely need to remove a few creases the next time that game night rolls around.

While there are ways to achieve this without using heat, in a time crunch your instinct will probably be to reach for your iron.

You can safely iron your neoprene game mat. Before you do though, remember to keep these precautions in mind:

Use the Iron on the Lowest Temperature Setting

Excess heat also has the potential to damage or deteriorate the neoprene itself so always be sure to use the lowest temperature setting on your iron.

Use a buffer material between the iron and the neoprene

Do not iron directly on the neoprene!!!

As mentioned above you should be ironing with the cloth side facing up but even then you need to use something as a buffer between the iron and the mat.

A sheet or a t-shirt work nicely for this purpose but you can also use something like parchment paper. If you plan on using the steam function of your iron then a thick towel is your best move.

How to Safely Iron Neoprene Clothing

When it comes to ironing your neoprene clothing follow all the steps mentioned above:

Also make sure you don't linger on one spot for too long as this can lead to the neoprene rubber melting.

It can also be a good idea to spot test the iron on an unimportant area of the clothing where possible. This way you can make sure you don't do any major damage to the outfit when ironing before you go ahead and iron the entire thing.

There is something else to consider too:

Besides using the lowest temperature setting and a cloth buffer layer, it is also important to remember that neoprene is an insulating material.

This means it could potentially become dangerously hot before you realize it. Imagine jumping into your freshly ironed dress only to get badly scolded.

Can you Safely Iron a Neoprene Wetsuit?

Yes, if you cannot avoid having to iron your wetsuit, it is possible to do it safely. Just remember to stick to the same guidelines we have outlined above:

Just like putting your wetsuit in the dryer is not advised, exposure to heat via an iron is also best to avoid if possible.

The heat from an iron can also have a shrinking effect on neoprene. Some people looking to shrink their wetsuits will use heat to do so. That is not our goal here so use the iron sparingly if you have to at all.

How to Avoid Having to Iron Your Neoprene

Any kind of heat is always going to degrade your neoprene over time so it will be best for the longevity of your item if you can avoid having to iron it.

To prevent the creasing of your gaming mats or other neoprene items, storing them flat or hanging them up is the preferred option.

You might be tempted to roll up your mat but this will stretch the rubber and/or the fabric, resulting in bubbling under the cloth.

Neoprene clothing should be stored on hangers to avoid causing creases. Similarly, a wetsuit hanger is the ideal option for storing your wetsuit if you never want to worry about having to iron it.

Ways to Get Wrinkles Out Of Neoprene without an Iron 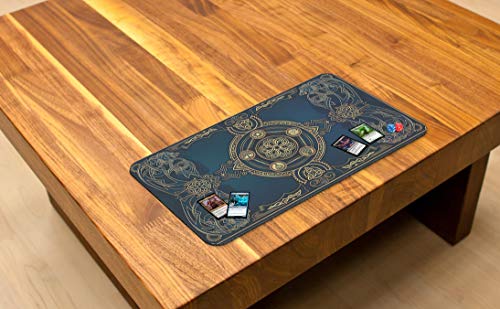 For those of you who would still rather not bring a hot iron anywhere close to your neoprene, there are other options to flatten out your neoprene gaming mat or clothing.

You can leave it hanging from a washing line overnight and let gravity do the work.

Alternatively lay your item out on a flat surface and place books (or other flat objects with some weight) over the creases to flatten them out over time.

Another method that utilizes heat is to blow a hairdryer a few inches from the surface while smoothing and flattening with your other hand as you go. Here again, using a low heat setting on the hairdryer will be the safest bet for the longevity of your mat.

For those instances that require a quick fix to the creases in your neoprene game mat or dress, it is possible to iron them out without damaging the items.

However, certain precautions do need to be taken to avoid the potential problem that could arise from doing so.

To iron neoprene safely you should follow these suggestions: