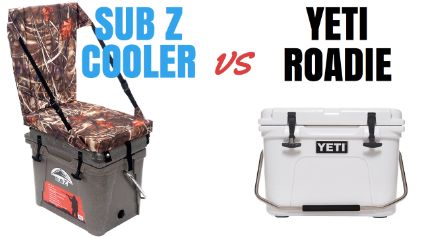 When looking at the Sub Z cooler vs Yeti you really have to ask yourself, is the Yeti roadie with twice as much? Our review says no, the Sub Z is a better cooler to buy, and let me show you why.

Sub Z is a small 23-Quart cooler by Nash and in this article I've be reviewing the Sub Z cooler and comparing it to the Yeti Roadie 20 (22-Quart) to try and find out which cooler is best.

Is the Yeti worth paying for or should you save yourself some money and buy the Sub Z instead?

The thing that drew me to the Sub Z initially was it's amazing price. While it's recommended price is $149.99 these things sell for around $125 on Amazon.com (see latest price here), or $130 with the seat (see that price here).

Compare that to the Yeti Roadie which is $249.00 and you'll soon realize that this is HALF PRICE compared to the Yeti.

This means that you can either get 2 Sub Z's for the price of 1 Yeti or you can save yourself over $100 and still get a nice seat on top of your coolers (we'll look at that in more detail in the features section).

So Sub Z offers a great saving over the Yeti and infact this is going to be the cheapest roto-moulded cooler you'll find anywhere on the internet. (Well, there is the Ozark 26-Quart Cooler from Wallmart with an RRP of $96, but that's constantly unavailable).

The price for the Sub Z is amazing.

So a big win for Sub Z vs the Yeti Roadie when it comes to price. 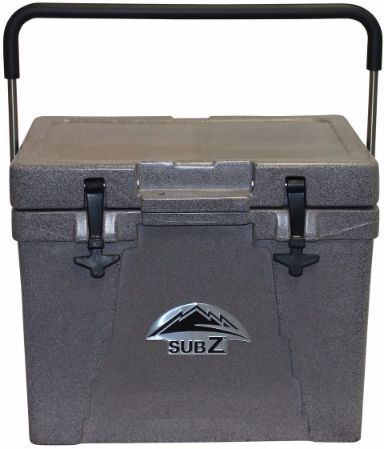 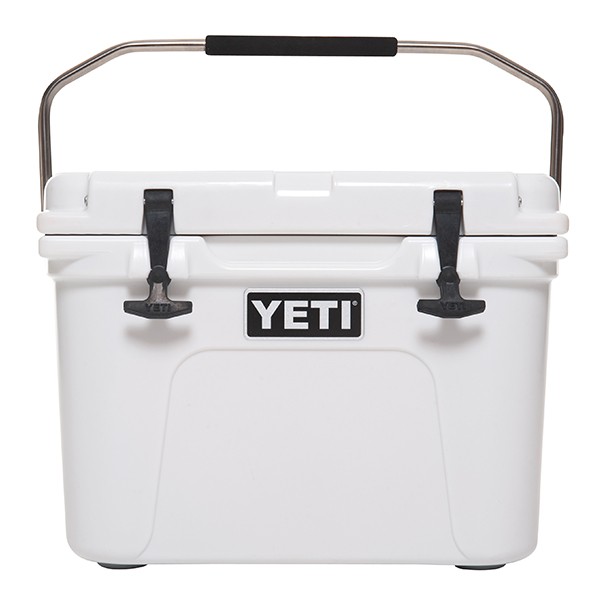 The design of the Sub Z and the Yeti Roadie are basically the same.

They are both similar sized coolers with a single pin hinge, rubber pull down latches and a single fold up handle for 1 arm carrying.

I wouldn't make a decision based off a 1-quart size difference.

The Yeti Roadie design is basically a smaller version of the Tundra series. It features a nice simple design with prominent Yeti branding on the front, bottom and lid.

It has a large stainless steel handle which can either stay upright or be folded down.

I will say that Yeti have the best quality manufacturing I have seen in any cooler. The quality of the plastic and the roto-moulded construction is undeniably the best of all the coolers out there. This thing looks like a premium cooler.

The Sub Z has a similar design, so similar that it basically looks like they copied the Yeti. To the point where they have similar locations of their branding on the front and on the inside of the lid.

It too has a large stainless steel handle that can either stay upright or fold away for convenience. 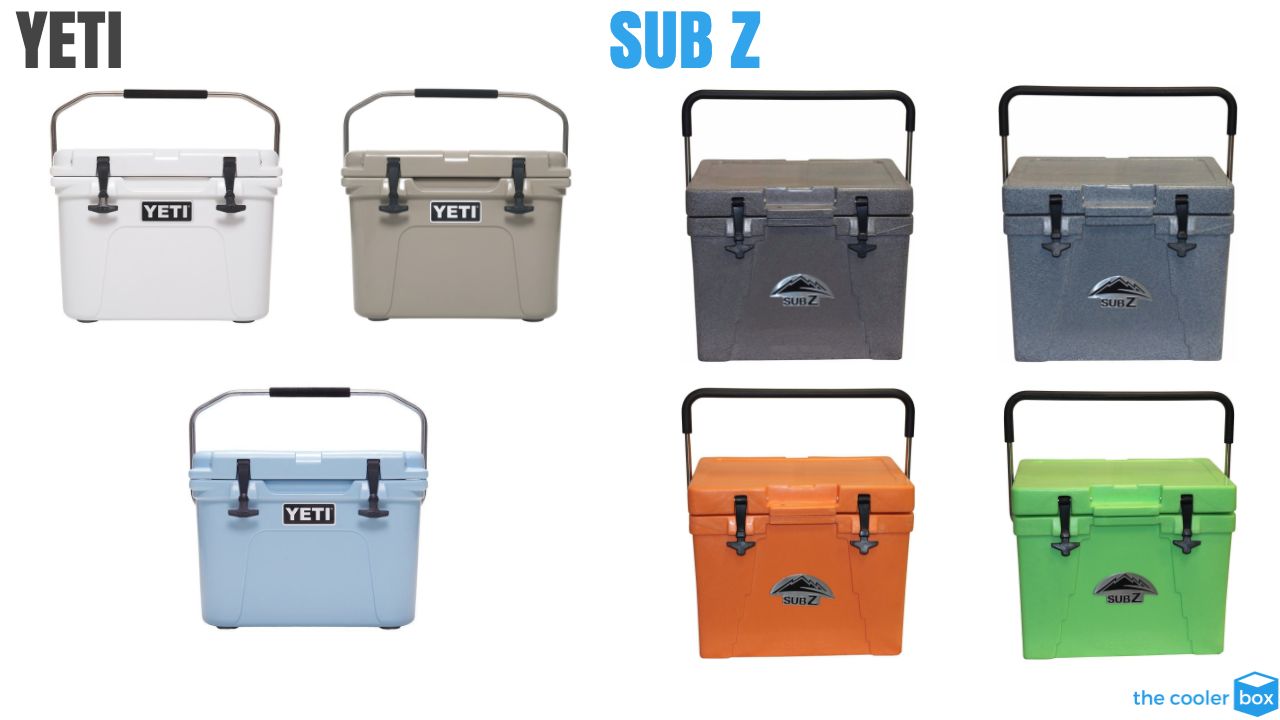 The color options of the Yeti vs the Sub Z coolers couldn't be much more different.

The Sub Z comes predominantly in a Tan and Blue shade, but with a granite grain. It is also available in a bright green and orange color for those who want something that really stands out.

Personally I like the Yeti cooler colors a lot better than the Sub Z colors. But do I like it enough to pay twice as much just to get the color I want? My answer is no…yours may be different. 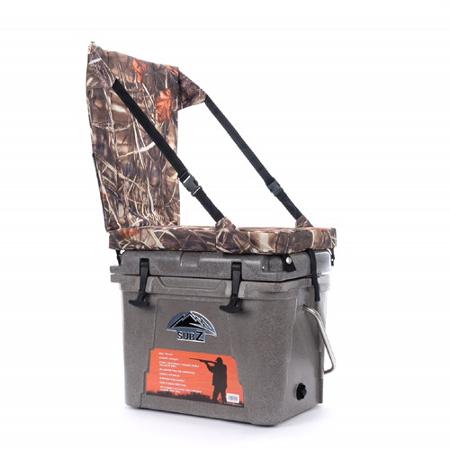 This is where the Sub Z really strides ahead of the Yeti.

The Sub Z comes with a fold up seat that has a padded cushion and a back rest!

Yeti Roadies don't come with a cushion. In fact Yeti don't manufacture cushions for the Roadie at all, you have to buy this cushion from a separate manufacturer for $99.

This means to get a Roadie with a cushion you're looking at $349…and the cushion doesn't have a back rest.

The Sub Z cooler with a seat sells for just $5 more that the basic Sub Z on Amazon (see here).

This seat isn't going to beat your la-z-boy seat in terms of comfort, but it is a surprisingly comfortable seat for the lid of a cooler.

Great for sitting around a camp fire, or for use when fishing. I absolutely love this seat and it is one of the main things that gets me so excited about the Sub Z cooler. I love it!

The carry handle on the Yeti shows a lot of the stainless steel and just has rubber in the center to act as a comfortable hand grip.

The Sub Z's handle is good as it allows you to carry the cooler with comfort on any part of the handle, however the Yeti handle looks much nicer.

Nothing to really report on the differences in drainage plugs as they are both almost identical.

Both are 1 inch drain plugs that aren't attached (so be careful not to lose them). 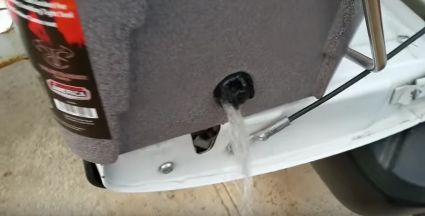 They also both have a hole through it allowing the cooler to drain when you only slightly twitch the drainage plug and don't take it off completely which is a nice feature.

You can see in the image someone draining their Sub Z cooler without completely taking out the drainage plug. This means you won't lose any ice or any smaller items when draining. A great feature on both coolers.

A big reason these coolers are so expensive is the premium ice retention that you get with a Sub Z or a Yeti vs your standard Coleman cooler.

A standard cooler this size will likely keep ice for 1 day, maybe 1.5 days maximum. A roto-moulded cooler like the Sub Z however will keep ice much longer.

You can see in Rick's video review here that his Sub Z cooler still had a decent amount of ice in it on day 3. Unfortunately by day 4 the ice was completely gone and there was only water left.

The Yeti is going to perform slightly better. Multiple ice tests have shown the Yeti to hold ice for 3.5-4.5 days with 4.5 days being the maximum in hot temperatures.

Both coolers are packed with 1.5 inches of insulation in the walls and a tough roto-moulded exterior. They both have commercial grade rubber gaskets in the lid to keep the cold air in, and the warm air out and the lid on both coolers is secured by pull down rubber latches.

So when comparing ice retention between these two coolers the Yeti has slightly better ice retention than the Sub Z and can be expected to keep ice for 0.5-1 days longer. However, I will admit this needs better side by side testing to be proven a fact.

The Yeti Roadie comes with a 5 year warranty, I couldn't find any details on the length of the warranty for the Sub Z so I'm not 100% sure on that one. 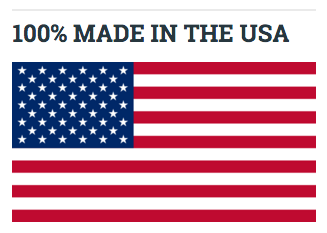 Sub Z coolers are proudly stamped with “Made in USA” on them, Yeti Roadie coolers are not.

So if buying a cooler that is made in the USA is important to you then go for the Sub Z. However, it's important to note that made in the USA doesn't make it a better cooler. Look at the Igloo Sportsman vs Yeti as an example, the Yeti is a premium cooler even though it is manufactured overseas.

In conclusion the Yeti is a slightly better cooler than the Sub Z, but the Sub Z hands down is a much better buy.

The Yeti is slightly better for a few reasons. The design and build quality and ‘higher end' than the Sub Z, it really is a premium cooler. It has a nicer looking handle and keeps ice slightly longer.

But is it 2-3 times as good as the price suggests? Absolutely not!

The Sub Z still looks great, still holds ice for over 3 days, still is as tough as the Yeti and better yet it's half the price and comes with an awesome fold out seat.

In my mind there is no question about it. For the majority of people out there the Sub Z is going to be a better buy.

The Yeti Roadie is really only for people who specifically want a Yeti for one reason or another (maybe to compliment their Yeti 45, or maybe they want the premium brand). But for the majority of us the Sub Z is going to do the job just a good, if not better for a fraction of the cost.

I hope that this review of Sub Z coolers vs Yeti coolers was useful to you and helped you to make your decision. Until next time, stay cool!