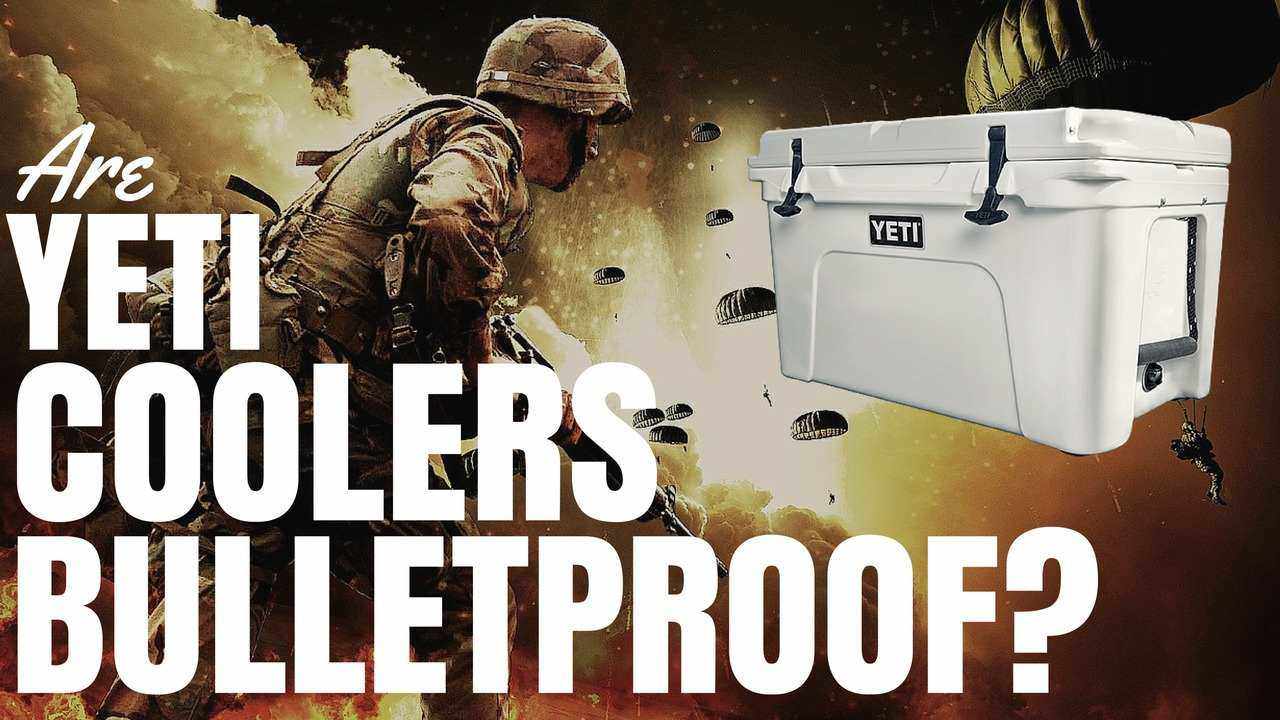 Yeti coolers are often referred to as bullet proof because of the amount of abuse they can take without breaking. But are Yeti coolers actually bulletproof?

Yeti coolers have a serious amount of insulation. They have 2 inches of polyurethane foam in the walls and base of the cooler and 3 inches in the lid of the cooler.

This insulation is covered by roto-moulded polyethylene plastic on either side.

Check out this video to see the cross section of a Yeti cooler.

In order to be classified as bulletproof, there are a variety of required tests which items must pass before they can be classified bullet-resistant (because with enough bullets almost nothing is bulletproof).

This is the testing that bulletproof vests need to go through before they can be sold or used in combat.

Unfortunately, the Yeti cooler has not gone through this testing and thus cannot be classified bulletproof.

They Are Tough, But Not That Tough

Yeti coolers are tough. They are certified bear proof and can withhold a great deal of beating.

These are great coolers that will last you a long time with everyday use and will survive and thrive in even the roughest of trips. But they aren't certified to be use as a bulletproof shield.

See how tough they are in the video below:

What If My Yeti Was Shot At?

If for some unlikely reason you found yourself being shot at and all you had to protect you was your Yeti cooler how would it go?

While it hasn't been actually tested before I personally wouldn't be too hopeful.

Bulletproof glass that is almost an inch thick and that weighs up to 150-250 pounds can stop a handgun. A plastic box with some foam in it weighing a total of 20 pounds wouldn't have much of a chance against a handgun.

Could You Make Your Yeti Cooler Bulletproof?

The answer to this question is a resounding yes, but you would need some serious modifications.

The simplest way to make your Yeti cooler bulletproof is to simply add a bulletproof plating to one side of the chest.

The lid has the largest area and is flat, however, that would make it quite heavy to lift the lid every time you wanted to use your cooler.

Adding the plating to side may be a better option as you can then lift the lid with ease and you can duck quickly behind your cooler in the case of attack.

So Is A Yeti Cooler Bulletproof?

No, a Yeti cooler is not bulletproof and you should not trust your life with it. However, it is a great cooler that will keep ice for 5-7 days and will take a hell of a beating and keep soldiering on.

All in all, it's a great cooler, however, I do believe there are some coolers better than Yeti that should be considered before buying a Yeti.